This past year has experienced exponential growth in Endoscopic Spine Surgery led by Asia, especially Korea and China, starting in all of 2018. Almost immediately after the Endoscopic Spine Health conference at UNM in Albuquerque, interest in endoscopic spine surgery increased in North America. Multiple MIS and Endoscopic Conferences and workshops in Korea, Thailand and China, propelled endoscopic spine surgery to new heights, and influenced mainstream traditional medicine and surgery in the USA.

China took over the number one spot from Korea, due to the sheer number of surgeons and non-surgeons incorporating endoscopic spine surgery in their practices, partly due to President Xi’s of China’s direction that all health care providers should work together, and The Chinese Medical Association as well as the Chinese traditional medical association sponsored symposiums in China. I was their international invited speaker.

Private Surgical MIS centers opened in China and Taiwan through a project initiated by John Chen former CEO of Bonovo, an OUS based MIS spine company selling MIS spine products in China. Both Chinese focused companies have since flourished. A MAGA hat provided by Morgan Lorio of ISASS in 2017 proclaiming “Make Spine Great Again” a reality became our rallying symbol.

Both ISASS and NASS is now making a concerted effort to sponsor workshops on endoscopic spine surgery, with IITS taking a background role of co-sponsorship. A conscious effort was made by your executive director to keep the IITS membership very small, anchored by a group of lifetime IITS members joining IITS by invitation only, based on their track record embracing and practicing endoscopic spine surgery as a major part of their spine practice. They can be seen at Spine meetings wearing the gold IITS.org pin.

Following a very full travel and lecture schedule the rest of 2018 to China, Chang Mai Thailand, Korea, Mexico, and Budapest, under the leadership of Gabor Racz, IITS officially embraced the training of non-surgeons and Pain Management, realizing that the enthusiasm for endoscopic spine covers all disciplines as a multi-disciplinary subspecialty endoscopic spine surgery will be needed to answer the affordability of surgical spine care by staging cost effective spine care. I also attended MIS spine meetings in China, supporting ISESS, a new Chinese endoscopic spine group. I traveled all over China Northern China to inaugurate non-surgical Chinese Association interest in endoscopic spine surgery. 2019 continued to be extremely busy. NASS fully adopted MIS and endoscopic spine at their annual meeting in Chicago under President Jeff Wang, and led by their Korean contingency.

2019 was also time for me to finally stop operating (at age 78) to focus my time on publishing my extensive experience of over 11,000 cases since 1991. I became very comfortable that my legacy will be carried on my son, Chris Yeung, and his team of fellowship trained spine surgeons with similar interest and in house training in MIS spine at our ASC, Squaw Peak Surgical Facility. The DISC team put together by Chris Yeung provides a wide spectrum of spine surgery options based on what is best for their patients Using training in open MIS spine surgery and endoscopic spine surgery. It was time to finally officially retire.

I opted for a very small retirement party of just current and retired staff. A few close friends and colleagues who supported me when I chose limit my practice to only perform, advance, and evolve endoscopic spine surgery as the safest, most efficient, and most cost effective staged method to treat acute and chronic back pain and sciatica.

I teamed up with Kai Lewandrowski,M.D., a Harvard trained researcher who became a spine surgeon and who also adopted endoscopic spine surgery. I brought Dr. Lewandrowski to ISASS. We are just 120 miles apart, he in Tucson, and I in Phoenix. Together, we have published and solicited articles for a PubMed cited open access Journal, The Journal of Spine Surgery as co-editors. The Journal will have over 30 solicited articles, including editorials from mainstream key opinion leaders in spine, clinical research articles, and surveys of endoscopic spine surgeon with no formal academic training but self taught through workshops after their formal training.

Because there are simply no academic training centers, I established the UNM Endoscopic Spine Center with a $2.5 million grant at my Alma Mater, the University of New Mexico School of Medicine. UNM is now a sought after academic spine fellowship program that offers endoscopic spine training under Peter Shin, a neurosurgeon and Evan rivers, a PM and R specialist.

When I decided to retire, I had so many patients, former fellows, former staff who helped me with the first Endoscopic ASC developed in the United States, that I opted to have only a very small reception for present and former staff who had a big part in helping me fulfill my vision.

I want share a few highlights of my retirement party including video comments from prominent spine surgeons and an interview of Chris that allowed him “confess” what it meant for him to join my practice. I also included a few comments from leaders of the spine organizations who surprised me with comments that are usually reserved for eulogies at funerals. 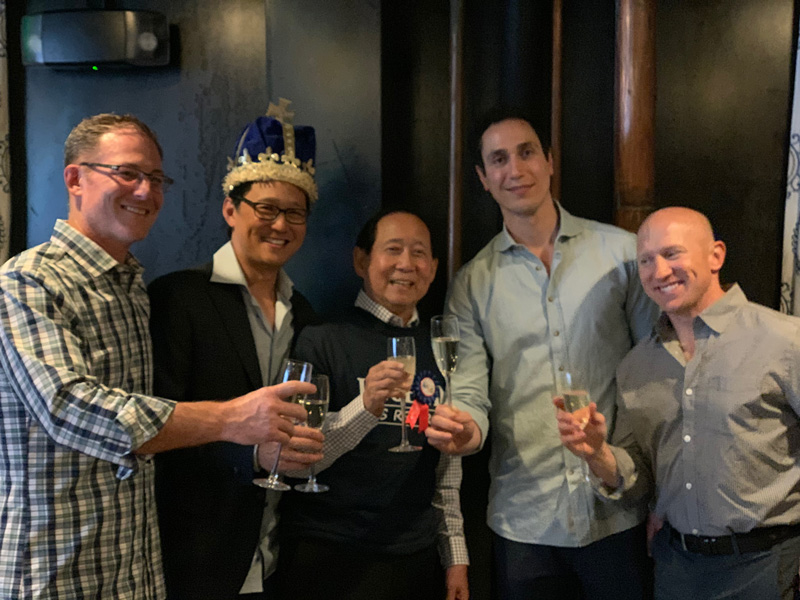 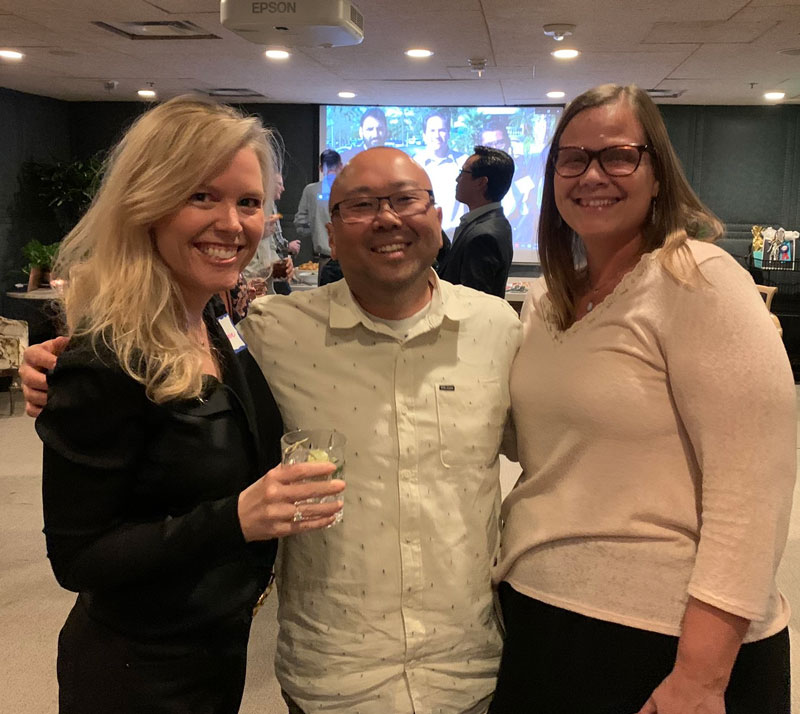 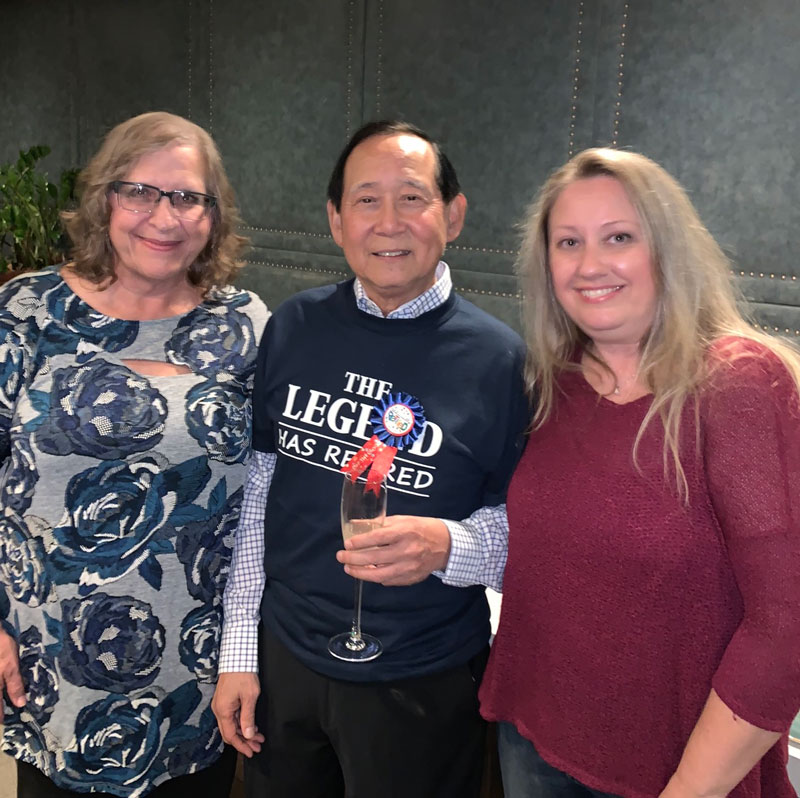 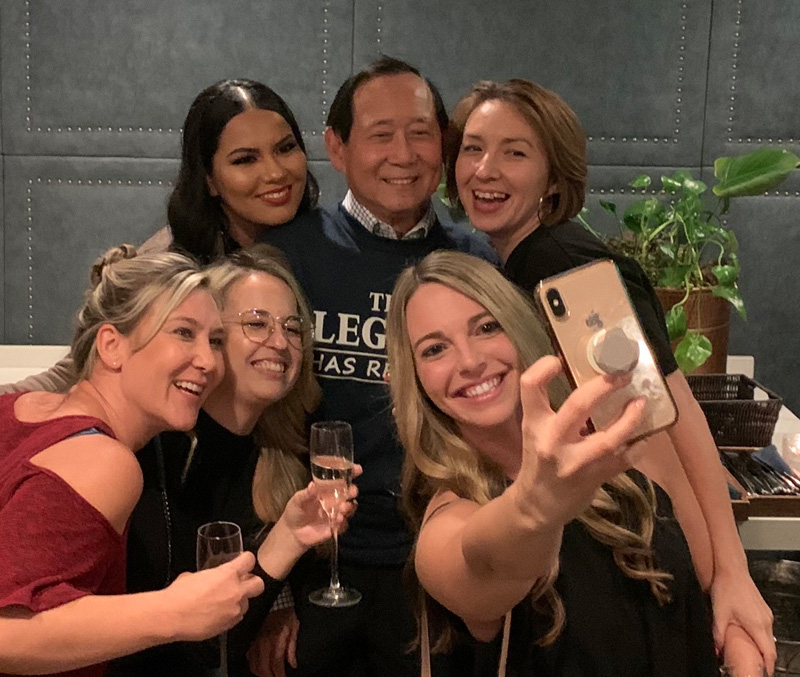 I will remain promoting IITS like Eugene Nordby, who is still doing well at over 100. I plan to turn IITS.org, a 501 c 3 organization over to a deserving surgeon making IITS one of the Oldest MIS spine organizations from its origin when chymopapain flourished.

I will be attending perhaps my last COA meeting in Shanghai that includes a whirlwind tour Taipei, HangZhou, and cities to help spread MIS endoscopic spine surgery in China and in the rest of the world.